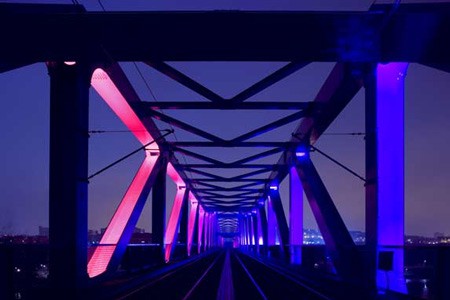 Great Britain’s largest public art “lightwork” installation has gone up in northeast England, on the Queen Elizabeth II Metro Bridge which shuttles the Tyne and Wear Metro from Newcastle upon Tyne to Gateshead over the River Tyne. “Nocturne” was created by artist Nayan Kulkarni and was funded by the public transportation group Nexus. 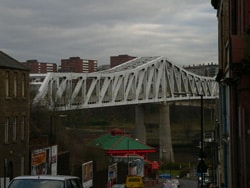 According to Nexus, “Nocturne – longer then three football pitches – will illuminate the so-called ‘blue bridge’ for at least the next 15 years. Its low-energy LED lights will never repeat the same combination of colours twice as pre-programmed barcodes of colour ripple across the structure, rising and falling in brightness and intensity to match the ebb and flow of the tide. Millions of people will see Nocturne every year from Newcastle-Gateshead’s vibrant quayside bar and restaurant district, from surrounding riverside apartments, offices, roads and railways, including the east coast mainline to London.”

According to the project’s website, “The light effects that Nocturne shows are determined by the colours displayed in digital photographs that have been sent. This means that anyone can change the way the bridge looks and feels by sending a photograph, or a scan of an image, in fact, anything that can be sent as a jpeg will control the appearance of the bridge.”

You can send an image in here. And here it is in action…