New Hampshire Episcopal Bishop Gene Robinson, who for several years has been at the center of a conflict within the Anglican church over its policies toward gays, says he plans to have a civil union with his partner of 18 years, Mark Andrew (pictured here, presenting Robinson with his Bishop’s mitre at his consecration). Said Robinson on Thursday: “My partner and I look forward to taking full advantage of the new law.” 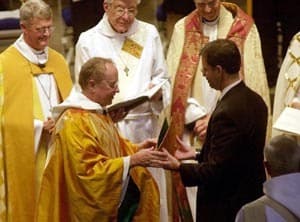 Robinson spoke to the Associated Press: “I think this moves us one step closer to the American promise to all its citizens of equality under the law. New Hampshire understands fairness and has acted on that value. I think this is a huge leap forward, but it is not full equality until we have equality. The biggest piece missing, of course, is federal recognition. I don’t think it will happen until we get several more states. It doesn’t have to be a majority, but it has to be a significant number embracing full marriage rights until we can expect that at the federal level. We are only arguing over a timetable. We have come further in a short time than any civil rights movement in history. Fifteen to 20 years ago, most Americans would have told you and been reasonably honest that they did not know a gay or lesbian. Now, there’s not a family left, or a co-worker, that doesn’t know someone. Now when you talk about the issue, a face comes up.”

Robinson and Andrew live in Weare, New Hampshire, a small town west of Concord. He has never been one to cower in the face of those who oppose his elevation with the church.