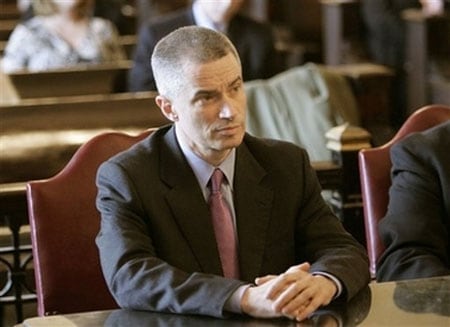 Former New Jersey Governor Jim McGreevey faced his estranged wife Dina for the first time since he resigned from office on Friday, in the first round of court hearings on their divorce.

The judge Karen Cassidy told the courtroom that McGreevey’s sexuality was “not significant” in considerations for their child’s welfare and denied Matos-McGreevey’s request for sole custody, saying the couple had agreed to continue their current visitation arrangements:

“One of the most contentious issues in the divorce is what the child should be exposed to. Matos McGreevey made McGreevey and his partner, Mark O’Donnell, take down a nude photograph in their Plainfield home, and has contended that Jacqueline should not be allowed to sleep in her father’s bed. The judge said the McGreeveys should ‘use their common sense and shall not introduce her to any non-age appropriate activities,’ a concept Cassidy said was ‘admittedly vague.’ ‘The court can’t be your child’s parent,’ Cassidy said. ‘I don’t want to micromanage your child’s life.’ However, the judge ruled that the child would not be permitted to sleep in the same bed with any adult except her mother or father. The court also appointed a parenting coordinator: a mediator used to help resolve child-related disputes, although the judge retains the final say.”

The judge also urged the couple to use “common sense”. Between hawking their tell-all memoirs and lobbing insults at one another, up till this point there hasn’t been much of it.

Following the courtroom appearance, McGreevey told reporters he plans to seek a civil union with his partner Mark O’Donnell.