A spokesman for New York Governor Eliot Spitzer told the New York Times on Friday that the governor would make good on an election campaign promise and introduce a bill to legalize gay marriage in New York. 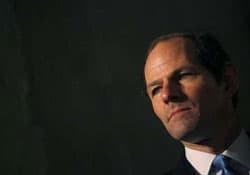 Said spokeswoman Christine Anderson: “The governor made a commitment to advance a program bill, and he will fulfill that commitment during this legislative session.”

The bill would face some heavy wrangling in the New York legislature. Reports the paper: “Legislation to legalize same-sex marriage has never made it to a floor vote in either the Assembly, which has a Democratic majority, or the Republican-controlled state Senate. Sheldon Silver, the Assembly speaker, has declined to take a stand on the issue. Joseph L. Bruno, the Senate majority leader, has supported legislation to outlaw hate crimes and workplace discrimination against gays, but he remains opposed to same-sex marriage. Even among those lawmakers who say they favor the legislation, there is some division over the best strategy to get it passed. Two legislators from Manhattan, state Sen. Thomas K. Duane and Assemblyman Richard N. Gottfried, both Democrats, have tried for several years to shepherd a gay-marriage bill through the Legislature and are trying again this year. That bill has at least 14 sponsors in the Senate and 42 in the Assembly.”

Despite his support for it, Spitzer has acknowledged that the bill would face a tough battle. He also has stated his priorities for the session recently, and they did not include gay marriage. The Times reports that gay groups plan an “intensive lobbying session” in Albany in early May.

You may have missed…
Like Quinn, Eliot Spitzer Says No to St. Pat’s Parade [tr]
Spitzer Aide Insists: Gay Marriage Still on the Agenda [tr]
Eliot Spitzer: “We Will Make [Gay Marriage] Law in New York” [tr]
(thanks, kenneth in the 212)