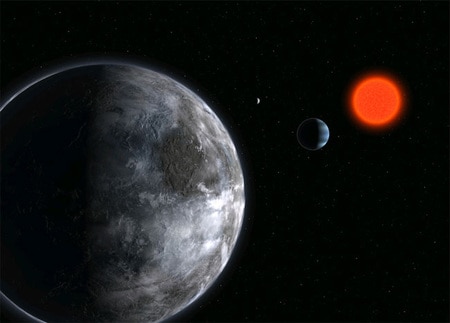 For all our news from outer space, click here.

Employing the “wobble” technique in which planets are detected by measuring fluctuations in a star’s orbit caused by gravity from masses in its solar system, scientists at an observatory in Chile have discovered an earth-like planet orbiting a nearby star (see photo below) in the constellation of Libra. The planet is 20 light years away (120 trillion miles). 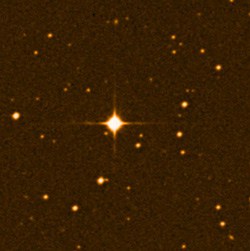 What has them excited is the planet’s existence in the so-called “Goldilocks Zone” — not too hot, not too cold, perfect for having the potential to support life. And scientists believe this new planet may either be a rocky planet or entirely covered by water.

A few details from Space.com:

“The new planet is about 50 percent bigger than Earth and about five times more massive. The new ‘super-Earth’ is called Gliese 581 C, after its star, Gliese 581, a diminutive red dwarf star located 20.5 light-years away that is about one-third as massive as the Sun. Gliese 581 C is the smallest extrasolar planet, or ‘exoplanet,’ discovered to date. It is located about 15 times closer to its star than Earth is to the Sun; one year on the planet is equal to 13 Earth days. Because red dwarfs, also known as M dwarfs, are about 50 times dimmer than the Sun and much cooler, their planets can orbit much closer to them while still remaining within their habitable zones, the spherical region around a star within which a planet’s temperature can sustain liquid water on its surface.”

The new discovery supports the theory that there are many more planets out there like Gliese 581 C.

And now for a short presentation: