Neal Anthony, from McMinnville, Tennessee, had his home targeted last weekend by a group of anti-gay vandals who threw a landscaping rock through his window and spray-painted anti-gay messages around the outside of his house, according to WKRN Nashville. 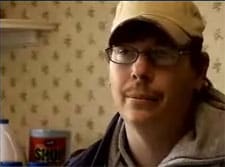 Anthony, who lives there with his partner Michael Duncan, says he makes no secret of the fact that he is openly gay.

Said Anthony: “I guess whoever was doing this thinks they are going to run me off from this community because I’m gay. That is not going to happen… this house has been in my family since it was built in 1851. People out there are ignorant… times have changed. They need to accept open-mindedness.”

“Fags deserve to die” and “all gays go to hell” were two of the messages written on the sides of his home, an historic residence built by his great-grandfather who was a county judge.

The vandals even went after Anthony’s 82-year-old mother who lives in a nursing home. “You’re mother is hell bound,” said one of the messages.

Investigators are treating the incident as a hate crime and say they have suspects.