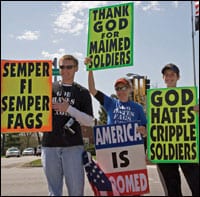 Never missing the opportunity to take advantage of a tragedy, Fred Phelps and his gang of haters at Westboro Baptist Church plan to picket the funerals of those killed in the Virginia Tech shootings, according to a message on their website (which I haven’t linked on purpose):

“WBC will preach at the funerals of the Virginia Tech students killed on campus during a shooting rampage April 16, 2007. You describe this as monumental horror, but you know nothing of horror — yet. Your bloody tyrant Bush says he is ‘horrified’ by it all. You know nothing of horror — yet. Your true horror is coming. ‘They shall also gird themselves with sackloth, and horror shall cover them; and shame shall be upon all faces, and baldness upon all their heads’ (Eze. 7:18).

Why did this happen, you ask? It’s simple. Your military chose to shoot at the servants of God today, and all they got for their effort was terror. Then, the LORD your God sent a crazed madman to shoot at your children. Was God asleep while this took place? Was He on vacation? Of course not. He willed this to happen to punish you for assailing His servants.”

No doubt they’ll blame the shootings on the gays as well. But as many people have noted, the more these nuts trot themselves out, the more a symbol of the need for tolerance they become.

You may have missed…
Aussie Reporter Flirts with the Phelps Clan [tr]
“You Wanna Preach? Let’s Preach!” [tr]