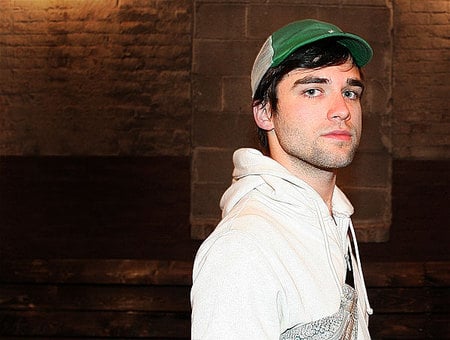 Last week Towleroad correspondents Josh Helmin and Josh Koll sat down with
twenty-four-year-old singer and songwriter Chris Garneau to
talk about his debut album, Music for Tourists. The indie record, with
Garneau’s softly sung vocals and heartrending lyrics, has garnered
praise from mainstream media including The Advocate and National Public Radio, with word also spreading like wildfire
throughout the blogosphere. Originally from Boston, and raised for a
few years in Paris during his childhood, Garneau has settled into the
Williamsburg neighborhood of Brooklyn, where he’s at work on a
follow-up album and preparing for a nationwide tour that begins on May
12.

How did your debut album, "Music For Tourists," come about?

Duncan
Sheik produced it. I was in the first workshops of Spring Awakening
[for which Duncan wrote the music] when it was being written. I was 16 when they first started it. I did
numerous productions of it with the same
team that is still working on it now. They were like, "Just sing this
song, and that song, but don’t
say a word." I was so awkward and I hated acting. Anyway, that’s how I
met Duncan. I did these silly recordings in
high school at a studio and I gave them to Duncan, and he said,
"I’m going to produce your record some day." When I moved back to New
York five years ago, we started working on it at his studio. It was a
long process. He’s a really busy guy, so there was a lot of
down time. We started when I was about 21, three
years ago.

Originally it was going to be really big and
really produced, but the longer the process
went on, the more eager I was to complete it, and we didn’t
really have any money going into it. We were recording everything on
our own time, and he was engineering it at the studio in Tribeca. I had
the studio to myself for a month, so I would just go in and set up,
which I had no idea how to do. I was recording by myself. Four of the
songs are just one take.

Do you read your reviews?

I do. I read all of them. I should probably stop. [laughter] It’s
really hard in the beginning to not do that. I don’t know who would do
that with their first album, to just be like, "I don’t read them." I
have to remember half the time that there are people
writing to make a point, or to have people just read their reviews.
There are writers who sometimes
write really drastic reviews, really good or really bad, so it sticks
out and people notice it. I understand that that’s a factor. I also try
and consider that there are writers who truly care about music and
really know music, probably a lot more than I know, and there are
things I can learn from some reviews. It’s a first record, and I was
young when I wrote the songs. I don’t expect everyone to love it.

While you were recording the album were you thinking about if you were going to be an openly gay artist?

Absolutely Kosher [the record company] asked me "How do you want to deal
with press and publicity for being gay? Do you want it to be not
mentioned at all, do you want to be out if people ask, do you
want to be really forthright?" At that
point I wasn’t exactly sure. My feeling
then was that I didn’t want to be the gay piano-playing "fagitor" from
Williamsburg who has a new album, "Music for Tourists." If anybody asks, or if gay press wants to run this feature
or that, I thought, "Let’s do it." I don’t feel terribly political. I’m
making music and I happen to be gay, and that’s what’s happening. If
you want to hear about it, fine, and if you don’t, that’s fine, too.

So everybody’s going to want to know: Are you single?

Why does everybody ask me that? That’s so weird. [laughing, looking embarrassed] My feeling would be
like, if I saw someone cute in a magazine or
wherever, I wouldn’t even care if they were single or not. I’d just be
like, "How can I interfere? Who are they in a relationship with, and how can I fuck it
up?" [laughter, then a pause] I am dating someone right now. He’s a photographer. He just gave me a
Polaroid camera — he mainly does Polaroids — and he’s teaching me how
to use it. It has a real lens so you can focus. It’s a for real camera,
not just a twenty dollar one you can get at a pharmacy.

Did you always know you wanted to be a musician?

When I was really young, and started playing piano, I thought
I would want to play music, but I didn’t know in what form. When I was in
high school I started thinking about what I
wanted to do, and it was music. As soon as I
started writing music, that’s what I knew I wanted to do.

For
more about Chris Garneau and his touring schedule, or to listen to
tracks from his new album, check out his website and MySpace profile.