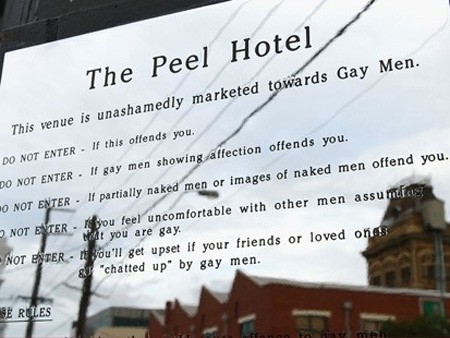 Tom McFeely, owner of the Peel Hotel in Melbourne, has won the right from an Australian tribunal to refuse entry to heterosexuals after arguing that an increasing number of straight people threatened the safety of his gay patrons.

According to Reuters, “McFeely said that, while the hotel welcomed everyone, its gay clientele had expressed discomfort over the number of heterosexuals and lesbians coming to the venue in the past year. He said there were more than 2,000 venues in Melbourne that catered to heterosexuals, but his hotel was the only one marketing itself predominantly to gay men.” Said Peel: “If I can limit the number of heterosexuals entering the Peel, then that helps me keep the safe balance.”

A tribunal agreed with Peel. Said Victorian Civil and Administrative Tribunal deputy president Cate McKenzie: [If heterosexual men and women came into the venue in large groups] this would undermine or destroy the atmosphere which the company wishes to create. Sometimes heterosexual groups and lesbian groups insult and deride and are even physically violent towards the gay male patrons. Some women even booked hens’ nights at the venue using the gay patrons as entertainment. To regard the gay male patrons of the venue as providing an entertainment or spectacle to be stared at, as one would at an animal at a zoo, devalues and dehumanises them. (This exemption) seeks to give gay men a space in which they may, without inhibition, meet, socialise and express physical attraction to each other in a non-threatening atmosphere.”

The decision has understandably created quite a bit of controversy. Said McFeely: “I was expecting some flak. But I did it to protect the integrity of the venue and to ensure the safety and comfort of my regular gay clientele.”

McFeely says that since the decision was handed down, the club has been receiving more threats than ever. McFeely: “The phone honestly hasn’t stopped ringing and that’s sad but it also in my head demonstrates the need for this type of thing, because there is still quite a bit of homophobia within the general community.” 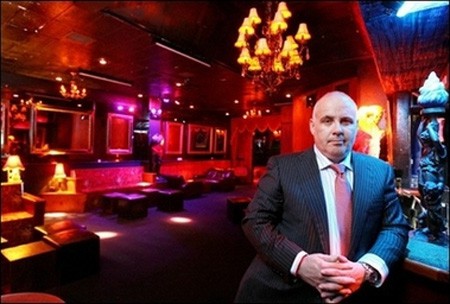