Jerry Falwell may be gone but the controversy surrounding purple, purse-carrying Teletubbie Tinky Winky lives on in Poland. 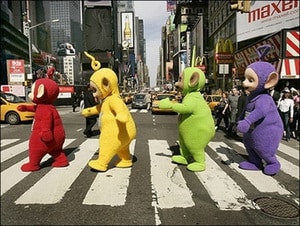 A government-appointed childrens rights watchdog there, Ewa Sowinska, says she’s asked psychologists to look into the character’s sexuality: “I noticed (Tinky Winky) has a lady’s purse, but I didn’t realize he’s a boy. At first I thought the purse would be a burden for this Teletubby … Later I learned that this may have a homosexual undertone.”

It’s just the latest in a series of anti-gay statements and actions by members of Poland’s government.

In March, a Polish Education Minister said teachers thought to be “promoting homosexuality” would be fired from their jobs, a mandate supported by Polish Prime Minister Jaroslaw Kacyzinski, who responded to the announcement, saying, “Nobody is limiting gay rights in Poland. However, if we’re talking about not having homosexual propaganda in Polish schools, I fully agree with those who feel this way. Such propaganda should not be in schools; it definitely doesn’t serve youth well. It’s not in the interest of any society to increase the number of homosexuals — that’s obvious.”

However, at least one parliament speaker, Ludwig Dorn, warned Sowinska of making comments “that may turn her department into a laughing stock.”