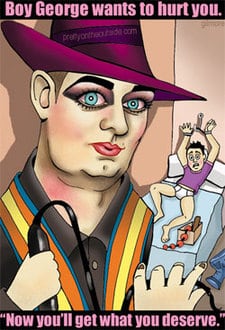 Boy George’s brother Kevin O’Dowd remarked on the singer’s reported arrest over the weekend for allegedly chaining up a male escort against his will. The escort, Auden Carlsen, reportedly ripped his shackles from the hook he was chained to and fled the singer’s flat after George brandished whips and sex toys and said “Now you’ll get what you deserve.”

Said Kevin O’Dowd: “The bloke (Carlsen) has done a far bit of modelling for our clothes shop, so how can what he said be true? George isn’t at all annoyed at the allegations, in fact, he thinks it’s hilarious. Yeah, he was arrested, but the police are always going to follow it up when someone makes a complaint like that.”

Carlsen said he went to George’s flat as “a £400 photographic model and not as an escort.”

(image courtesy of pretty on the outside)