Last week I posted an update on the trial of Christopher Gaines for the murder of Scotty Joe Weaver in Alabama in 2004 after Gaines made a surprise guilty plea in order to spare himself the death penalty. 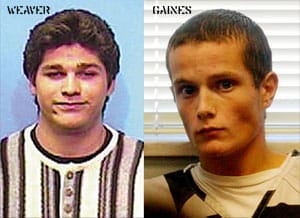 Yesterday, a jury sentenced Gaines to life in prison without parole for the grisly murder, in which he and two others robbed Weaver before beating, strangling, and stabbing him to death. They then transported his body to a rural area and set it on fire. The charred corpse was discovered partially decomposed by the side of a rural road.

Gaines and Weaver were roommates. Why was Weaver killed with such vengeance, such brutality? “[District Attorney Judy] Newcomb said Weaver and Porter (one of Gaines’ accomplices) never got along because Porter had problems with Weaver’s homosexuality. Porter once called Weaver a derogatory name, Newcomb said.”

According to the Associated Press, “Gaines showed no emotion as the prosecutor described the slaying…The Baldwin County jury deliberated about 20 minutes and convicted [him].”