Edmund White has written a new play, Terre Haute, based on an imagined series of conversations between Oklahoma City bomber Timothy McVeigh and author Gore Vidal. Both subjects have had their names changed in the play. The provocative approach White takes is raising eyebrows. 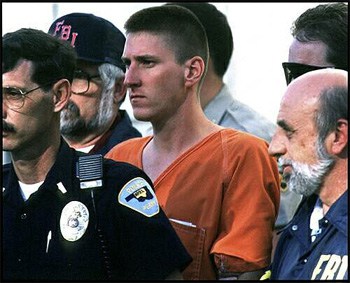 From a new interview in The Telegraph: “Given its UK première last year by theatre company Nabokov in Edinburgh, it imagines a series of conversations between McVeigh (restyled Harrison) and a distinguished seventysomething American writer called James (modelled on Gore Vidal) in the run-up to the mass-killer’s execution at Terre Haute Penitentiary, Indiana, in June 2001. Inevitably the piece grapples anew with the familiar theme of whether acts of terrorism can be justified – but what makes it contentious, possibly incendiary, is that it flags up the possibility of sexual attraction between the two men: ‘If I thought you’d never know, I’d unzip that orange jumpsuit just a bit so I could see your chest. Touch it,’ says James. In the context of what his interlocutor has done, even notional physical contact carries a huge transgressive charge.”

White tells The Telegraph that he wrote the play for an actor with whom he was in a relationship:

“The desire to write a play was not, in the first instance, prompted by shared outrage but by the urge to provide a starring role for a young actor with whom he had embarked on a torrid affair, the details of which are relayed in an entertainingly un-self-censored chapter of [White’s autobiography] My Lives entitled ‘My Master’. ‘I said: ‘All you have to do is tell me to do something and I’ll do it.’ He said: ‘I look like Timothy McVeigh, why don’t you write a play about him, then I can be in it?”” 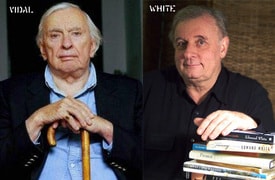 The play has angered some who have seen it for White’s humanizing of McVeigh, whose truck bomb detonated outside the Alfred P Murrah Federal Building in April ’95, tragically ending the lives of 168 people, including 19 children, and injuring 850 others. It’s no surprise that White’s drama has touched a nerve.

White tells the Telegraph that he feels McVeigh was “vulnerable sexually” without saying flat out whether or not he believes the terrorist might have been gay.

He also reveals that it wasn’t difficult for him to write from the point of view of his friend Gore Vidal, but that the perspective evolved into White’s. White finally drops an explosive confession of his own: 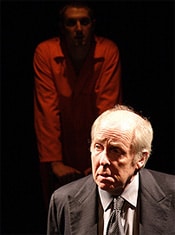 “White continues: ‘I thought, ‘How can I do that? I can’t imagine writing lines from McVeigh’s point of view.’ Then I remembered Gore Vidal had been in correspondence with him. I thought: ‘Well, they never met, but wouldn’t it be interesting if you changed the names and let them meet?’ I’ve known Gore. We’re roughly the same age group, we’re both Europeanised Americans, we’re both gay. I was presumptuous enough to write things from his point of view but as I went on writing the play, it became much more about me. Gore later told me: ‘I would never have been attracted to someone like that.’ But I would have been.”

“The admission is so frank, so unapologetic, that for a moment I’m stunned into silence,” admits White’s interviewer.

Truman Capote did it in In Cold Blood and now White. What is it with gay literary authors sexually fetishizing their murderous subjects?

Has anybody out there seen the play? What’s your review?