Australian High Court Justice Michael Kirby, who has recently been a vocal proponent of celebrity pop stars coming out and also for gay marriage down under, launched Victorian Arts Law Week at the Arts Centre in Melbourne by joining beatboxer Elf Tranzporter for a spirited rap. 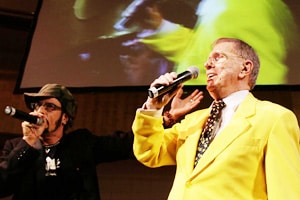 Via The Sydney Morning Herald: Throwing off his sober blue suit to reveal an electric yellow jacket (one might have even described the jacket as “pimping”), Justice Kirby walked off the stage and entered the crowd: preparation, he said, for his scheduled retirement in two years’ time ‘when I’m going to become the Jerry Springer of Australia’.”

Kirby’s rap was drawn from a speech he delivered at the opening of the 2002 Gay Games: “We believe that the days of exclusion are numbered / The days of fusion are come / In our world, everything can find its place/ By our lives, let us all be an example of respect for human rights / Fusion, not exclusion.”

Somehow I can’t imagine Justice Ruth Bader Ginsburg getting up on stage with Deadlee on the Homorevolution Tour.