Police are not certain whether sexuality was a factor in the murder of Trevor Charles Brewster, whose body was discovered under a footbridge in a park in Cole Harbour, Nova Scotia Wednesday. 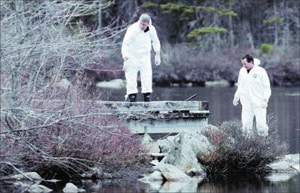 According to the Chronicle Herald, “Colin Brown, the man who found the body, said the victim was dressed only in jeans and had a garbage bag over his head and what looked like a knife wound in his abdomen. He said the body appeared to have been purposely hidden, probably recently.”

The Halifax Daily News says the area’s gay community is concerned. “Everyone’s talking about it, absolutely,” said one person with whom they spoke.

Brewster was open about his sexuality, according to his neighbors: “His sexual orientation wasn’t an issue.”

The park’s reputation as a gay cruising area may offer some clues: “The boardwalks are part of Spectacle Lake Park, an area that has drawn some notoriety in recent years as a cruising area for gay men. Last June, regional police and the RCMP issued a warning that they’d be adding patrols in Spectacle Lake Park and Seaview Park in Halifax in reaction to public complaints about outdoor sex acts.”

Some near the crime scene suggested that Brewster “met the wrong person” and others are suggesting possible connections between Brewster’s murder and the murder of another man, Michael Paul Knott, who was killed under similar circumstances recently near Halifax.

UPDATE: Police have warned gay men to stay away from cruising areas near Halifax.