The NYT anoints Shoreditch as the nexus of London’s more underground gay scene: 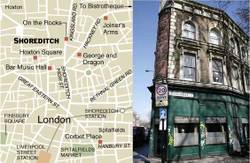 “Soho and Vauxhall may be the heart of London’s ‘Queer as Folk’-watching, muscle-boy scene. But Shoreditch — fueled by the creative energy of the city’s East End — has emerged as a grittier, fashion-forward and often outrageous hotbed of gay night life. The epicenter is the George and Dragon, a topsy-turvy pub where an animatronic horse head shares wall space with cowboy hats and a sequined guitar. Boy George and Butt magazine, the risqué quarterly, have been hosts to events there. The fashion designers Alexander McQueen and Hedi Slimane have been known to drop by, too. Indeed, the pub has become such a subcultural phenomenon that in 2005 it was recreated in the galleries of London’s Institute of Contemporary Arts.”

Any Londoners out there care to chime in?