Grey’s Anatomy actor Isaiah Washington continues to make amends for the anti-gay slurs he hurled in the direction of castmate T.R. Knight earlier this year. Yesterday it was announced that Washington would shoot a public service announcement for GLAAD and GLSEN. 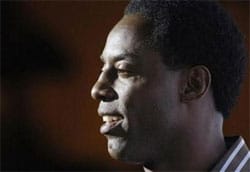 Washington met with the groups earlier this year following his red carpet outburst and as a result the groups announced an “ongoing partnership” with the actor “to combat prejudice and intolerance”. It appears that partnership is beginning to bear some fruit.

At the time, GLAAD president Neil Giuliano said, “Isaiah understands that he is going to be judged by more than just his apology. He knows that his future actions – including the genuine first step that today’s meeting represents – will demonstrate his sincerity in becoming part of the solution to anti-gay bigotry. We welcome the opportunity to work with him in the coming months to help improve the cultural climate faced by LGBT people across this country.”

Washington’s publicist Howard Bragman said that the ad will be shot in the next few weeks: “We’re gonna have — I want to say at least two versions of it at this point. We may broaden our message a little.”