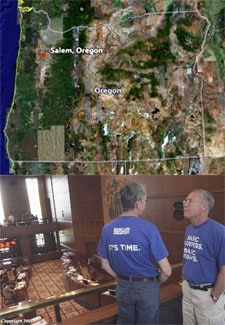 The Oregon Senate on Tuesday gave final legislative approval to House Bill 2007, which will give same-sex couples in the state all the benefits of marriage via domestic partnerships. The Oregon House passed the bill in mid-April. It will now go to Governor Ted Kulongoski for his signature.

It’s the second victory for gay rights in the state in a very short period. The legislature also recently passed a bill outlawing discrimination based on sexual orientation.

Two Republicans joined one independent and all the Senate Democrats in approving the domestic partners legislation. According to the AP, “Oregon’s domestic partnerships measure covers benefits relating to inheritance rights, child-rearing and custody, joint tax filings, joint health, auto and homeowners insurance policies, visitation rights at hospitals and others. It does not affect federal benefits for married couples including Social Security and joint filing of federal tax returns. Opponents have called domestic partnerships ”marriage by another name,” and said the bill violates the will of voters who endorsed a constitutional ban on gay marriage in 2004.”

Basic Rights Oregon live-blogged yesterday’s vote and has a breakdown of how the voting went.