John McCain has restated his support of “Don’t Ask, Don’t Tell” in a letter to Executive Director C. Dixon Osburn of the Servicemen’s Legal Defense Network, calling “misguided” any policy that requires the military to “accomodate a particular lifestyle.” 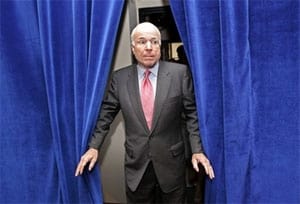 Repeating words spoken by Colin Powell during a 1993 debate on the policy, McCain warns that “…the legislation unambiguously maintains that open homosexuality within the military services presents an intolerable risk to morale, cohesion, and discipline.”

McCain concludes: “I believe polarization of personnel and breakdown of unit effectiveness is too high a price to pay for well-intentioned but misguided efforts to elevate the interests of a minority of homosexual servicemembers above those of their units. Most importantly, the national security of the United States, not to mention the lives of our men and women in unifrom, are put at grave risk by policies detrimental to the good order and discipline which so distinguish America’s Armed Services. For these reasons, which have nothing to do with my personal judgments about homosexual behavior, I remain opposed to the open expression of homosexuality in the U.S. military.”

McCain also said in mid-March that he felt it was “logical to leave this issue alone.”