Lawyers representing eight same-sex couples in Connecticut who say their civil unions aren’t enough and they want gay marriage begin presenting oral arguments at the state Supreme Court today. Lawyer: “A law that says every right, every benefit and every legal aspect of marriage is given to same-sex couples shows that this is nothing more than a legislative policy decision of a special legal institution. The legislature already determined a fundamental sameness between couples. Constitutional law has discarded long ago any notion that a separate institution for a minority can ever be equal.” 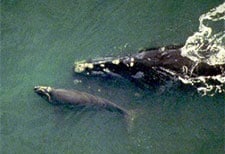 Endangered right whales seen in record numbers off the coast of Provincetown: “We’ve identified at least 120 whales. That’s out of a (worldwide) population of around 400.”

Lithuanian bus company removes gay tolerance ads after drivers refuse to drive buses carrying them: “Algirdas Krivickas, director of the trolley bus company in the western town of Kaunas, said employees had expressed strong emotions over the adverts which read: ‘A gay can serve in the police’ and ‘A lesbian can work at school’. Drivers had refused to take out the trolley bus bearing the adverts. They had now been removed. ‘Some said they feared the trolley bus could be vandalised, some said they do not want friends to laugh at them,’ Krivickas said.”

Christopher and Anne Rice hold Palm Springs benefit for Lambda Literary Foundation: “We hope to partner with local bookstores, libraries and colleges, holding symposiums and bringing prominent LGBT authors to the desert. It will be good for the Palm Springs area to be recognized as a cultural center for LGBT authors.”

Barack Obama roars in Kansas City: “The day that this president steps down, the entire world will breath a sigh of relief. After half a trillion dollars spent and after 3,400 lives lost of our bravest young men and women, thousands more wounded, legs severed, nerves shattered, it is time for us to bring this war to a close.” 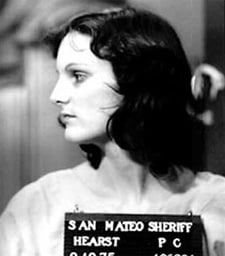 Patty Hearst denies she’s been offering advice to future jailbird Paris Hilton: “I must say that my heart goes out to the inmates of the Century Regional Detention Center. Forty-five days with Paris Hilton and the attendant publicity seems like cruel and unusual punishment to me. Perhaps THEY should be petitioning the Governor for relief?”

Massachusetts Attorney General Martha Coakley says that the proposed amendment to ban gay marriage in that state may be unconstitutional and says she will support those challenging it: “She quoted a joint court opinion by Justices John Greaney and Roderick Ireland saying the 2003 SJC decision that legalized same-sex marriage ‘may be irreversible because of its holding that no rational basis exist, or can be advanced, to support the definition of marriage’ as only between a man and a woman. The opinion also noted that the amendment would discriminate against same-sex couples by removing rights they already had been granted.”