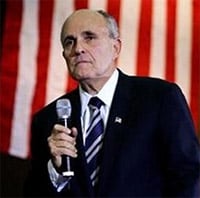 Last week, Giuliani flip-flopped on the issue of civil unions, which he had previously supported. His spokesperson told the New York Sun: “Mayor Giuliani believes marriage is between one man and one woman. Domestic partnerships are the appropriate way to ensure that people are treated fairly. In this specific case the law states same sex civil unions are the equivalent of marriage and recognizes same sex unions from outside states. This goes too far and Mayor Giuliani does not support it.”

Frank Ricchiazzi, who helped found Log Cabin three decades ago, warned Rudy: “Mainstream Republican voters and moderate voters are going to vote for you. Don’t tilt to the right.”

According to a survey taken this year by Log Cabin Republicans, the Human Rights Campaign and the National Rifle Association are the two organizations which receive the greatest amount of financial support from gay Republicans.

The convention also hosted a talk by former NBA player John Amaechi. Amaechi spoke on both his coming out and on the state of gay rights and attitudes in America today. 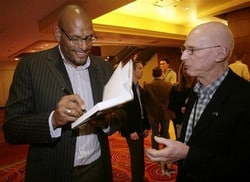 Said Amaechi: “I underestimated America. I braced myself for the wrath of a nation under God. I imagined that it would be a firestorm, that it would be some insane number of letters demanding my deportation or my death. And in fact, 95 percent of the correspondence I’ve had have been overwhelmingly supportive and positive. But I will say that the 5 percent that I’ve had have been unbelievably, viscerally, frighteningly negative.”

Amaechi noted that not a single former teammate has been in touch with him since he came out, and his story has never been mentioned on NBA.com: “Probably 30 of my former (NBA) teammates have my e-mail and my telephone contacts and probably 16 or so of those I was in regular touch with and there are probably 10 people who I have (on instant messenger). And…nobody who’s active in the NBA has been in touch with me since the day I came out, despite the fact that most of them knew I was gay in the first place.”

Perhaps noting his audience, Amaechi, who is a British citizen, did comment diplomatically on the political climate in the country: “It’s hard for me to hide the fact that I am no fan of this administration, as much for their foreign policy as for their stance on (gay, lesbian, bisexual and transgender) issues. However, I am no fan of the Democratic candidates who take four days before they decide that Gen. Pace’s comments were not very nice.”