In Mexico City yesterday, 18,000 people disrobed to be part of photographer Spencer Tunick‘s latest human installation, in the city’s massive Zocalo Square. A “no-fly” zone was established above the historic plaza, rich in cultural and social history: “One of the world’s biggest and most imposing squares, the Zocalo is framed by a cathedral, city hall and the National Palace official seat of government, which is adorned with murals by Diego Rivera. A ruined temple next to it was once the center of the Aztec civilization and was used for worship and human sacrifice. Spanish conquistadors used bricks from the temple to help build their own capital.”

Said one participant to Reuters: “This event proves that really we’re not such a conservative society anymore. We’re freeing ourselves of taboos.” Mexico City recently began registering its first same-sex civil unions since a law was passed legalizing them last November. 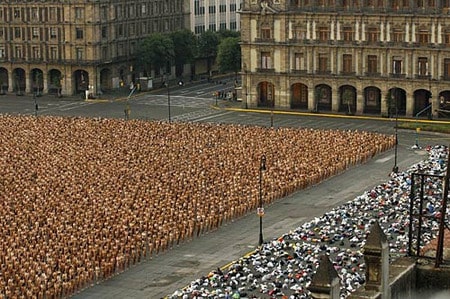 You may have missed…
World AIDS Day Premiere: Positively Naked [tr]
Tunick Watch: Naked on the Coast of Spain [tr]
Moons for the Misbegotten [tr]