In about an hour, (1pm EST) the House of Representatives is scheduled to vote on the Hate Crimes bill introduced in mid-April. 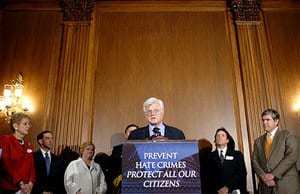 The religious right has gone into overdrive, spreading misinformation to defeat the bill. Judy Shepard published an op-ed piece on The Politico today to combat their “bald-face lies”.

“One group spreading misinformation to its membership — the so-called Traditional Values Coalition — has even gone so far as to put a picture of Jesus on a ‘wanted’ poster, implying that religious people who speak out against homosexuality could become the targets of criminal investigations. Obviously, that’s just not true. The people spreading this type of propaganda are blatantly lying to their members out of fear that the federal government might finally legislatively recognize that gay Americans exist, and need the same rights and protections the rest of us take for granted. Even worse, the Traditional Values Coalition is misleading and manipulating its members to make these phone calls to Congress, even when they know in their hearts that they are spreading lies. This type of behavior has nothing to do with real traditional values.”

The President today threatened to veto the bill should it reach the oval office:

“The White House, in a statement, said state and local criminal laws already provide penalties for the crimes defined by the bill and ‘there has been no persuasive demonstration of any need to federalize such a potentially large range of violent crime enforcement.’ It also questioned the constitutionality of federalizing the acts of violence barred by the bill and said that if it reaches the president’s desk ‘his senior advisers would recommend that he veto the bill.'”

Below, a video from HRC outlining some of the misinformation being spread by the right wing: