Gay activists in Rome have moved the date of the city’s Gay Pride parade due to a scheduled visit by George W. Bush, following his participation in a “Group of Eight” nations summit in Germany. 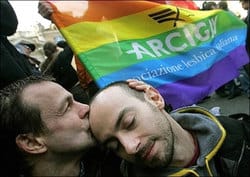 Because of the onslaught of media attention the President’s visit is expected to create, organizers decided their message would be better served if they waited a week.

Arcigay, Italy’s gay rights organization said in a statement: “The decision has been taken to avoid the risk that Gay Pride is relegated to second rank compared to other demonstrations, or that its holding is made impossible for reasons of public order.”

Gay rights in Italy are at a crucial stage, as parliament considers a draft bill submitted in February that would expand rights for same-sex and unmarried heterosexual couples there.