Sarah Jessica Parker recently revealed (and I believe this was originally said on Oprah) that her four-year-old son James Wilke has been asking her questions about what “gay” means. 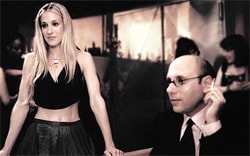 Said Parker: “He’s very interested in what being gay is because so many of our friends are gay. When talking around your child you have to think very carefully and you have to be prudent about you’re choice of words. You talk about people looking for happiness and fulfilment in their lives and how all families are different and look different. You’re forced to really consider your answers. You’re forced to think a lot about what you’re saying and how you’re saying it – even the tone.”

It was also revealed that SJP took little James to his first celebrity party for gay stylist Serge Normant. Said Parker: “He loves Serge. He wanted to come.”

Previous Post: « Keith Olbermann: The Government Has Failed Us on Iraq
Next Post: Josh Holloway: Cool Water not to be taken Literally »