In last night’s debate of contenders for the Republican nomination for President, former Wisconsin Governor Tommy Thompson said employees should have the right to fire workers if they are gay. 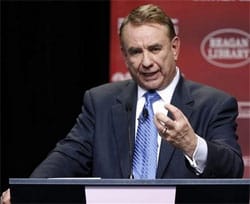 MR. HARRIS: Governor Thompson, same theme. If a private employer finds homosexuality immoral, should he be allowed to fire a gay worker?

MR. THOMPSON: I think that is left up to the individual business. I really sincerely believe that that is an issue that business people have to got to make their own determination as to whether or not they should be.

AmericaBlog has video of Thompson’s answer, but also notes that Thompson’s campaign has apparently retracted the statement, saying that Thompson “misheard the question” and is opposed to discrimination.

UPDATE — Thompson later clarified to CNN: “I made a mistake. I misinterpreted the question. I thought that I answered it yes when I should have answered it no. I didn’t hear, I didn’t hear the question properly and I apologize. It’s not my position. There should be no discrimination in the workplace and I have never believed that. And, in fact, Wisconsin has one of the first laws, which I supported….So, I just made a mistake and that’s all I can say. I’m sorry and I misinterpreted the question and I answered yes, when it should have been no…All I was thinking was that it was a question that came up and I did not hear it, I should have asked to have it repeated. I didn’t and I answered it and I answered it wrong. It’s not my position, it never has been. I have always been against discrimination and prejudice. In fact if you would have listened to the debate, they asked me a question about racism and I said that the president of the United States, whoever he is, has to take the point and has to be the person that does not allow discrimination or racism in any degree, whatsoever.”

Previous Post: « Brady Quinn Demonstrates Another Kind of Touchdown
Next Post: Michelle Rodriguez Rants Against Curve for Outing Her »