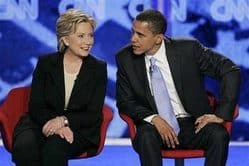 “Pride Month is a reminder that while we have come a long way since the Stonewall riots in 1969, we still have a lot of work to do…Too often, the issue of LGBT rights is exploited by those seeking to divide us. But at its core, this issue is about who we are as Americans. It’s about whether this nation is going to live up to its founding promise of equality by treating all its citizens with dignity and respect….It’s time to turn the page on the bitterness and bigotry that fill so much of today’s LGBT rights debate. The rights of all Americans should be protected — whether it’s at work or anyplace else. ‘Don’t Ask, Don’t Tell’ needs to be repealed because patriotism and a sense of duty should be the key tests for military service, not sexual orientation. Civil unions should give gay couples full rights. And those who commit hate crimes should be punished no matter whether those crimes are committed on account of race, religion, gender identity, or sexual orientation….This Pride Month, let’s make our founding promise of equality a reality for every American.”

Hillary Clinton waved the rainbow flag on her website as well, but went further in touting her record as a supporter of gay rights: 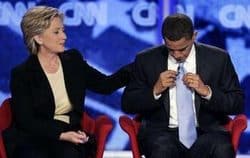 “As we celebrate Gay and Lesbian Pride Month, I want to commend the LGBT community on a historic year that brought our country closer to equality and closer to ending discrimination against lesbian, gay, bisexual and transgender Americans. Just a year ago, I worked with my Democratic colleagues in the Senate as well as with LGBT leaders to defeat the divisive and discriminatory Federal Marriage Amendment (FMA). Since then, we not only defeated FMA, but we have been able to make real progress in achieving fairness for all Americans. In fact, since June 2006, New Jersey and New Hampshire became the third and fourth states to adopt civil unions and Washington and Iowa were added to the list of states that outlaw discrimination on the basis of sexual orientation or gender identity. A similar bill in Colorado is expected to be signed into law soon. And in Congress, we are finally on the verge of passing the Matthew Shepherd Act, which would expand hate crimes laws to include sexual orientation and gender identity. What a difference a year makes…

The rest of Clinton’s statement, after the jump….

“The start of Gay and Lesbian Pride Month is a great time to celebrate these recent victories but also to reflect on all the work that still needs to be done. Unfortunately, while this is the first time in years that hate crimes legislation has a strong chance of passing both houses of Congress, President Bush has already signaled that he would veto this landmark bill. The truth is we will see little progress for the LGBT community at the national level until we have a new Democratic president. For six long years, the Bush Administration has only seen the families that matter to them. It’s been a government of the few, by the few, and for the few. And no community has been more invisible to this administration than the LGBT community.

“I’m proud of my record standing up for the LGBT community during my years as First Lady and as a U.S. Senator. But when I take office in January 2009, we’ll finally be able to define success by more than the bigotry we stopped and the bad decisions we prevented. America will finally have a president who moves this country forward. When I am president, we will work together to make sure that all Americans in committed relationships have equal benefits and that nothing stands in the way of loving couples who want to adopt children in need. We’re going to finally expand our federal hate crimes legislation and pass the Employment Non-Discrimination Act. It is just plain wrong that in the year 2007, people who work hard and do a good job every day can still be fired because of who they love. And finally, we will put an end to the failed policy of Don’t Ask, Don’t Tell. Courage, honor, patriotism and sacrifice — the traits that define our men and women in uniform — have nothing to do with sexual orientation.

“I am honored to have the support of so many people in the LGBT community and look forward to working with the community closely throughout the campaign. Together, we can continue the journey America has been on from the very beginning — to form a more perfect union and realize the goals and values we believe in. That’s the promise of America — and that’s why I’m running for president.”