The conservative Illinois Review blog has criticized the makers of Shrek the Third of “promoting transgenderism” because of the film’s depiction of a manly stepsister: 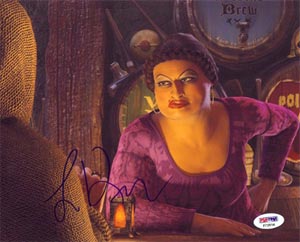 “Shrek’s not the problem. It’s the awkward inclusion of a transvestite and the uselessness of the character himself (herself?) in the story that is troubling. Right in the midst of a warm ‘traditional family’ setting, the film writers place a man dressed as a woman in with Sleeping Beauty, Cinderella, Snow White (the good gals). The crossdressing character simply doesn’t make sense, except as a ploy to desensitize children and parents to transgenders. Homosexual activists now are careful to not only use the term ‘LGBTs’ as a unit, they are more boldly now declaring lesbians-gays-bisexuals-transgenders as a unit pushing together as one for civil rights. Those confused about their sexual roles are pushing for equal rights to be free to publicly demonstrate their odd sexual behavior. For transgenders, appearing to be a different sex in public is their particular turn on. We need to understand that acceptance of this sexual behavior is just another step moving our world toward sexual chaos.”

First of all, transgender is different than transvestite. I’ve also known a few women who just happen to sound like Larry King (who reportedly voices this gal). And if we’re talking characters who might inspire children to don devilish drag, Cruella DeVille was way ahead of the curve on this one.