More news about the Edwards campaign today. Elizabeth Edwards is scheduled to appear at the Alice B. Toklas Lesbian Gay Bisexual and Transgender Democratic Club breakfast at the Sir Francis Drake Hotel this weekend. 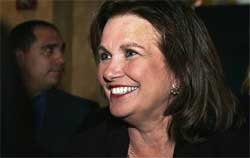 “Organizers say it marks the highest level of presidential campaigning at the annual Gay Pride Parade,” according to the San Francisco Chronicle.

Political strategist David Mixner, who has given his endorsement to John Edwards presidential campaign, said:

“It certainly is another barrier falling. There’s been a taboo on any (candidate)-related Gay Pride events. [However], just like straights at Mardi Gras, there’s a wide range of different events, from picnics and political clubs to the parade. The myth of what Pride is will be exploded … and that taboo will now be removed. And I can’t think of a better person to do it than Elizabeth Edwards. She won’t let people tell her where she can go and who she can talk to.”