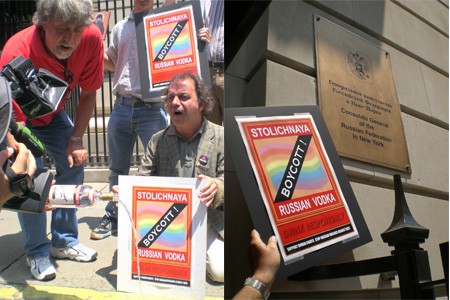 Another kind of demonstration was happening at the Russian Consulate in New York yesterday as rainbow flag designer Gilbert Baker, activist Brendan Fay, and a group of supporters poured Stolichnaya vodka into the street in front of the consulate to protest the Russian government’s treatment of gays.

While it was reportedly filmed by Russian news agencies, the demonstration was criticized by some who pointed out that although Stoli is labeled “authentically Russian vodka” it may now be a Latvian brand. Others noted that Stolichnaya is a strong supporter of gay causes here in the United States and thus an improper target for a boycott.