Two teenage Portland girls are considering filing a complaint after a bus driver kicked them off the bus for kissing and hugging: 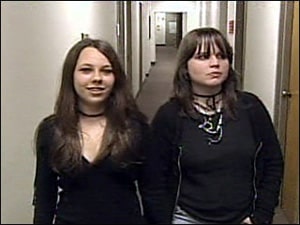 “Maika Rich and Jocelyn O’Neal, both 14, admit they were kissing while on the No. 12 bus traveling on Barbur Boulevard at about 5 p.m. on June 8. They were headed to the Sexual Minority Youth Recreation Center. They say a female passenger complained to the driver about the kissing and that the driver told them to ‘knock it off’ and also called them ‘sickos.’ Rich says she then gave O’Neal a hug because it appeared she was upset about the exchange. They say at that point the driver stopped the bus and ordered them off. The girls say they are used to being picked on at school but felt defenseless against an adult. Maika Rich’s mother, Ronnda Zezula, says she doesn’t think the driver would have treated two gay adults or a heterosexual couple in the same manner.”

Kudos to Ronnda Zezula for defending Maika and having such a progessive attitude about her 14-year-old daughter. Some parents would have given her the Zach treatment.