Dale Levitski, the 34-year-old gay chef from Chicago who is currently competing in Top Chef: Miami, gives an interview to the Chicago Tribune in which he talks about Chicago cuisine and if sexuality has any bearing on culinary perceptions: 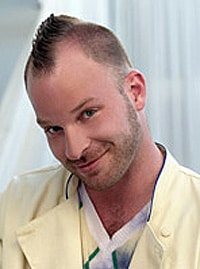 “The one thing you have to keep in mind is be yourself. If you want to play a character then play a character. I wanted to cook and be myself and have as much fun as I possibly could, and learn as much as I possibly could and have a once in a lifetime experience. If the public loves me or hates me, it doesn’t matter. I had an amazing experience…Being a gay chef, there’s a preconceived notion of being the big, snappy queen and that’s what I’ve fought against my entire cooking career. I’ve been cooking for 15 years now and that’s the last thing I am in the kitchen…I’ve walked into kitchens feeling a little under the gun, thinking about what other people are going to think about me being gay, and you definitely have a little bit of insecurity about it. I don’t want to say I’ve overcompensated, but I’ve become a better chef because of it. It’s like, ‘Fine, I will be just as good as you. I will prove to you that it doesn’t matter. I’m not going to be that little sissy you might think I am. I’m going to be better than you.’ And it’s worked out for the best.”