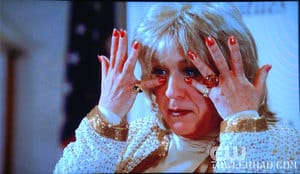 Veteran actor Leslie Jordan, whom I noted last week made the first of a series of appearances on the new Kevin Williamson prime time soap Hidden Palms as recovering alcoholic/fairy godmother/drag queen Jesse Jo, talks to the Associated Press about how being sober has helped his career. The AP notes that the hard-working character actor has been sober now for 10 years following a car accident that landed him in jail with Robert Downey Jr.

Says Jordan: “If there is anything that kids could walk away with it is that people who use drugs and alcohol are masking something. With me, it was my homosexuality. It was just easier to be gay when I was high. So I stayed high for 33 years. It was recreational, then it just evolved … I don’t know when it went from recreational to medicinal, but that’s the line you cross where I needed a drink to get to a party, to be funny, to be me.”

Jordan says he plans to publish a memoir, My Trip Down the Pink Carpet: Or How I Became Insufferably Satisfied With Myself, in April of next year: “I read some of it and I was thinking, my mother will DIE. She told me one time, ‘Leslie honey, if I live to be 105, I will never understand this deep-seeded need you have to air your dirty laundry.’ She said, ‘Why can’t you just whisper it to a therapist?'”