The owner of Provincetown’s gay Boatslip resort, Rich Ferrell, has accused his partners of securities, mail and wire fraud: “Brian DeLaurentis, Ferrell’s attorney, is about to begin the discovery phase of a civil lawsuit filed in U.S. District Court in Florida. Charging 12 defendants with racketeering, including the seven other co-owners of the Boatslip, the lawsuit asks for $2.25 million in damages, plus attorney’s fees. Under discovery, depositions are taken from witnesses and evidence gathered for presentation in court.” 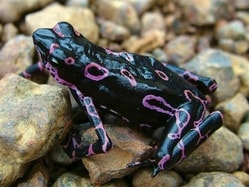 Scientists discover 24 new species in Suriname, including this frog with fluorescent purple markings.

Chris Evans and his massive flaming pecs are back in the new Fantastic Four film.

New York State could generate $184 million over three years if gay marriage were legalized: “The figures account for additional costs to private businesses that would be required to insure newly married gay spouses. The study assumes that more than 56,000 same-sex couples would travel from out of state to be married here, generating $137 million in wedding spending. That spending would include hotels for the couples and guests, and other wedding expenses, such as catering halls or restaurants.”

Chicago Mayor Daley opens $20 million gay and lesbian center on Halsted Street: “Daley, who has emerged as a champion on gay and lesbian issues, got a hero’s welcome at the center, where the rooftop garden bears his name. He engineered $5.4 million in loans and subsidies for the Center on Halsted and pushed through domestic partner benefits for city employees. He appointed Tunney, Chicago’s first openly gay alderman, supports gay marriage, welcomed the 2006 Gay Games and has increased city support for AIDS funding.”

VIDEO – Man leaps at Popemobile: “The incident, which immediately recalled the attempted assassination of Pope John Paul II in 1981, occurred at the beginning of the Pope’s weekly general audience in St Peter’s Square in the Vatican. Pope Benedict did not seem to notice the man and continued his audience as usual. A Vatican official said the man, who was wearing a pink t-shirt, black shorts, a cap and sunglasses, managed to reach the back of the Pope’s open-topped vehicle before the pontiff’s team of eight guards wrestled him to the ground. He is being questioned by Vatican police.”

Senator Mike Gravel slams Hillary Clinton over ‘Don’t Ask, Don’t Tell’: “‘Don’t Ask’ has not been a benign ‘transition policy’ as she claims. It was a cowardly political calculation that reaffirmed the military’s unjust discharge policies and resulted in the dismissal of 10,870 dedicated service people since 1993. Discharges for homosexuality actually increased under ‘Don’t Ask’ and cost taxpayers more than a quarter of a billion dollars. How can Hillary complain about the recent discharge of 55 Arab language specialists under ‘Don’t Ask’ and not admit that the policy is a terrible mistake?”

Gay candidate runs for office in Ferndale, Michigan, outside of Detroit.