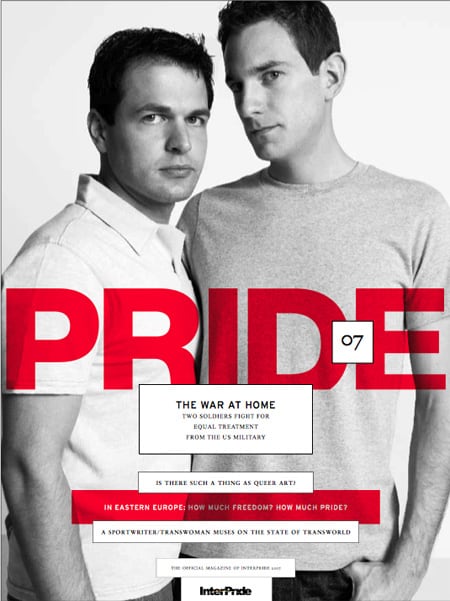 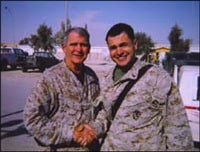 Pride ’07, the annual publication of Interpride, The International Association of Lesbian, Gay, Bisexual, Transgender and Intersex Pride Coordinators, which you may have seen in summers past, begins shipping this week with a cover story on two gay American soldiers who came out while serving, began a clandestine love affair, and have since become active in calling for the repeal of "Don’t Ask, Don’t Tell".

Former Marine Lieutenant Antonio Agnone and former Senior Airman Brandon Juarez met while performing respective familial and military duties in Washington D.C, during President Bush’s inauguration in 2005. Now out of the military, the two have begun a campaign to put an end to its discriminatory policies toward gays.

In the article, Agnone and Juarez tell writer Tim Kilbride that their frustration over the military’s policies ignited over one phone call Agnone made to Juarez from Iraq on a day he had been shot at. The couple realized that the military would never notify Juarez if something happened to Agnone. Their "growing resentment" over the forced secrecy and discriminatory treatment compelled Agnone and Juarez to begin speaking out. It’s a resentment felt by many in the military’s ranks, they say, and "undercuts the ideals the military seeks to instill in all its service members."

Agnone and Juarez also detail the lengths they went to in order to keep their relationship a secret, and reveal a hush-hush underground gay support network within the military not unlike the secret societies that existed before the gay liberation movement began in the 50’s and 60’s.

‘When I was in the military I depended on the people who had gone before,’ Agnone explains. "And then when I realized that, okay, I need to start doing what I can for gay issues, too, I kind of see myself as almost standing on their shoulders." Already, he says, he served as a guidance counselor of sorts for fellow gay Marines and sailors at Camp Lejeune. It wasn’t a role he sought, but it ended up being one he came to embrace. "One day I was sitting at work and I got an email. And my heart stopped because the email said basically, ‘I saw you at the club last night.’ And there’s only one club in Wilmington. I mean, there’s one club, one gay bar.

After deleting any trace of the message, he recalls, "I ended up going, ‘Well shit, if I don’t write them back they’re going to think that I’m mean, then what will happen? I don’t even know who this person is.’ So I wrote back and I was like, ‘Here’s my cell phone number. Don’t email me anymore. Just call.’ And so I ended up becoming almost a mentor for this person, and through that developed a network of many, many other Marines, and sailors, actually.

It was great, you know, because he had a stable life, and so they could confide in (him)," Juarez observes. It’s clearly a responsibility both of them take very seriously. And that willingness to be of service and support, to mentor younger gay soldiers attempting to navigate not only their military duties and careers—but their lives—with a two-ton boulder strapped to their back is something they both admire in each other. "We actually found out that there’s a lot of us," Agnone says with lingering amazement. "There were just steady couples at Camp Lejeune in the middle of North Carolina.

To a gay man who’s worked with the military for years, that’s still a surprising thing to hear. Conventional Washington wisdom holds that if you took all the gay people off Capitol Hill and out of the White House the government would shut down, but that’s not an assertion I would include the military in.

And yet, here are two guys from the inside saying, "Yes, in fact, if ‘Don’t Ask, Don’t Tell’ really achieved its goal, our nation’s readiness would be in very serious trouble.

Agnone insists that it’s an "extreme minority of bigots" shaping the military’s policy on gays and wonders why these bigots are being protected. Expect to see more of him in the coming months. Agnone begins another ‘tour of duty’ this month with HRC, designed to help put a human face on the efforts to repeal ‘Don’t Ask, Don’t Tell’. Here’s a message in reaction to last night’s Republican debate and the cowardly, bigoted positions taken by the candidates.

Look for the Pride ’07 publication, edited by Peter McQuaid, as it rolls out in various cities over the summer. It should arrive in Los Angeles this week in advance of L.A. Pride.