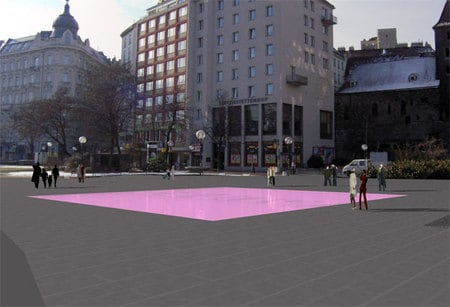 It looks as though a memorial to Gay and Transgender victims of the Holocaust is going to be a reality in Vienna, Austria following an international competition to design it. Or perhaps it’s already open. I haven’t been able to confirm that.

Der Rosa Platz, or “Pink Place” is a shallow pink pool. According to planners, “the water itself will be colored pink.”

From the plan: “Stretching across the basin is a relief with the letters ‘QUE(E)R’ looking out of it. Stepping from letter to letter one can walk across 1the basin… In its coloring The Pink Place is strongly reminiscent of the “Pink Triangle”, the badge those who were victimized and murdered for their sexual orientation during the Nazi era were forced to wear. ‘QUE(E)R’ is an open place for an open-minded society. The Pink Place is a meeting place, a place of contemplation or simply a place where you can dip your strained feet into the refreshing water on a hot summer day. Like a ‘red’ carpet, ‘QUE(E)R’ leads to the Inner City which, at the same time, is reflected on its surface. This temporary reproduction of the city gets overlapped by reflections of the passers-by and invites them to stay, to watch and to remember.”

Below, the plaza, situated at the edge of the Inner City at Donaukanal, before and after.