The Human Rights Campaign’s Joe Solmonese and Melissa Etheridge will question Democratic candidates in Los Angeles in a first-ever debate on gay issues, sponsored by LOGO and HRC. It will take place on August 9 and be broadcast live on LOGO as well as stream live at their website. 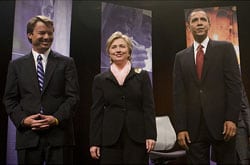 According to 365gay.com, “the panelists in a statement said they plan to cover a range of issues including relationship recognition, marriage equality, workplace fairness, the military, hate crimes, HIV/AIDS and other important issues.”

In addition to questions from Solmonese and Etheridge, others will be able to participate by submitting questions through LOGOonline and HRC.

Hillary Clinton, John Edwards, and Barack Obama have all confirmed they will take part in the debate.

UPDATE: Chris Dodd, Mike Gravel, and Dennis Kucinich have climbed on board.