FireFLAG/EMS of the Fire Department of New York, “the nation’s oldest and largest LGBT firefighter organization”, was invited by Universal Pictures to screen the new Adam Sandler film I Now Pronounce You Chuck & Larry. While they said that some of the jokes might be considered offensive, they were generally pleased at the message of tolerance and said that the movie depicted experiences similar to ones many firefighters face when ‘coming out’ on the job. 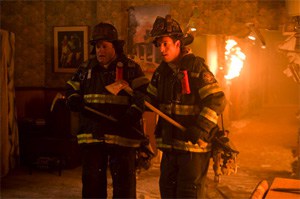 “While ‘I Now Pronounce You Chuck & Larry’ is a broad comedy, the reality is there are gay firefighters in many departments across the country, including the FDNY. The ‘coming out’ process in the movie mirrors what I, and many of my colleagues, have gone through on the job. Initially we may have dealt with disbelief, disdain, and even prejudice from our fellow firefighters. But significantly, as in our experiences, the film shows the process gay firefighters go through on the job as they move towards acceptance by their fellow firefighters. The film shows the journey that gay firefighters go through in their careers, the brotherhood of firefighters, and ultimately their respect for one another based on actions and deeds. Over the years, the FDNY and its members have become more supportive of gay firefighters and have made strides in improving how they are treated on the job. FireFLAG/EMS supports this progress and is actively involved in the department’s actions on gay-related issues. ‘Chuck and Larry’ is, of course, a comedy and some of the humor may be considered offensive to some, but the growth of the principal characters during the course of the film is the ultimate measure of how to judge the intent and heart of the filmmakers.”