After the posting of 13 years of records by Deborah Jeane Palfrey (aka the “D.C. Madam”) which revealed the name of Louisiana Republican Senator David Vitter, Vitter has issued a statement apologizing: 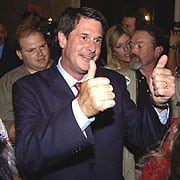 “This was a very serious sin in my past for which I am, of course, completely responsible. Several years ago, I asked for and received forgiveness from God and my wife in confession and marriage counseling. Out of respect for my family, I will keep my discussion of the matter there — with God and them. But I certainly offer my deep and sincere apologies to all I have disappointed and let down in any way.”

Think Progress notes that in 2005, Vitter promoted his platform “protecting the sanctity of marriage”:

“This is a real outrage. The Hollywood left is redefining the most basic institution in human history, and our two U.S. Senators won’t do anything about it. We need a U.S. Senator who will stand up for Louisiana values, not Massachusetts’s values. I am the only Senate Candidate to coauthor the Federal Marriage Amendment; the only one fighting for its passage. I am the only candidate proposing changes to the senate rules to stop liberal obstructionists from preventing an up or down vote on issues like this, judges, energy, and on and on.”