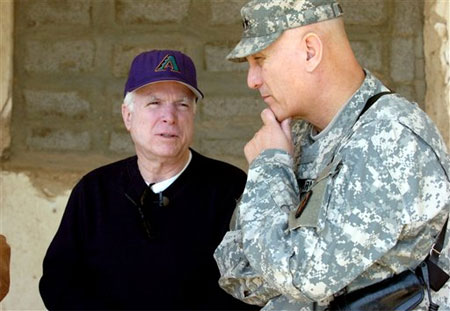 Radar reports: “In the final days of his imploding candidacy, John McCain has taken a page out of Richard Nixon’s play book, finding increasingly bizarre explanations for his political failures. Strangest of all: He reportedly feels his handlers forced him to wear ‘gay sweaters.’ According to one insider, the knit-picking was the crescendo of a tirade by the Arizona senator, in which he blistered aides about the minutiae of the campaign. While many septuagenarians live in a perpetual state of sweater weather, McCain reportedly declared his frustration with being told to don the perceived homosexual outerwear in order to look younger and more approachable. ‘He wasn’t happy being dictated to. The sweaters were part of that,’ the source says.”

Actually, this look was more likely the real culprit: 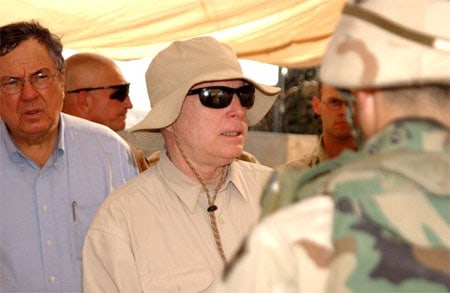 You may have missed…
McCain Restates Support of “Don’t Ask, Don’t Tell” [tr]
John McCain Not Sure if Condoms Stop Spread of HIV [tr]
John McCain: Gays are Welcome to Marry, Just Not Legally [tr]