A series of power outages in San Francisco caused a massive web host to completely lose power for an hour Tuesday, taking down huge sites like Craigslist, Technorati, Typepad, Second Life, and many others. The outage, you may have noticed, also affected Towleroad. The power was restored in less than an hour, but it took all day for some sites to get back to fully-functioning. Since commercial-grade data centers promote themselves as having lots of back-up power solutions for extreme cases like this one, the failure was baffling. 365 Main, the faulty data center, says they are continuing to investigate what caused the total failure. 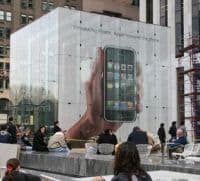 AT&T and Apple had an awkward situation early this week when both reported widely different numbers in the number of iPhones activated versus iPhones sold. AT&T claimed that a disappointing 156k iPhones were activated, sending Apple stocks dropping. But Apple recovered with reports that it sold 270k iPhones in the first 2 days. The reason for the discrepancy was unclear.

Netflix is struggling. Will Blockbuster choke them out of existence, or will the mail-order movie rental innovators make a comeback?

The $100 laptop, an initiative to bring affordable technology to children in developing countries, will finally begin production this year, with units becoming available for sale this fall. The organization behind the laptop, One Laptop Per Child, has fought against much criticism over the past 5 years, but has proposed an innovative design that is cheap, low power, and rugged.

Tech Video of the Week In light of the recent "crash" of many popular websites noted above, here is a video we showed you earlier in the week from the strangely prescient Onion News Network.  Breaking News: All Online Data Lost After Internet Crash – Officials confirm that all online data has been lost after the Internet crashed and was forced to restart.

Previous Post: « Scottish Man Gets 18 Months for Fatal Beating of Gay Friend
Next Post: Rearview Mirror: Looking Back at the Week on Towleroad »