Some puerile news from the world of grown-up fratboys… 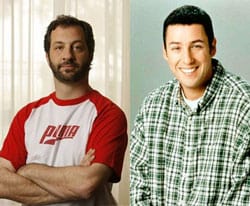 “Apatow says, ‘When we first moved in together, very early on he said, ‘Let me see your penis.’ I was like, ‘No! What do you want to see that for?’ He’s like, ‘I just want to know what I’m dealing with.’ He wasn’t embarrassed about it… He would tell other people ‘Judd won’t show me it, he won’t show me it.’ One day I’m going to the bathroom, standing up and I just see Adam over my shoulder. All he says to me is, ‘All right, man. All right.’ I guess it was all right.”

Sounds about right for Sandler, which brings us to Apatow and gives us a chance to share this clip from the upcoming Apatow-produced film Superbad, on a related topic (possibly NSFW):