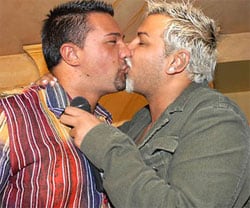 “The mother of the child is Azis friend Gala, the singer himself is the biological father of the baby, who will have his boyfriend for a second daddy. The little wonder has been named Raya. Same-sex marriages are illegal in the country, but that didn’t stop the folk singer from re-enacting the whole ritual with his boyfriend Niki Kitaetsa last year.”