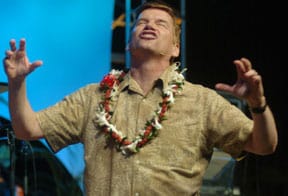 You may remember that last week deposed New Life pastor Ted Haggard sent an email to supporters asking for their financial support in order that he and his wife obtain degrees in psychology and counseling as they moved into the Phoenix Dream Center halfway house.

Overseers at New Life Church were stunned at Haggard’s request and released a statement that Haggard’s actions were a no-go: “Mr. Haggard’s solicitation for personal support was inappropriate. It was never the intention of the Dream Center that Mr. Haggard would provide any counsel or other ministry. Mr. Haggard will not be moving in or working with the Dream Center. He will not be doing any ministry. He will be seeking secular employment to support himself and his family.”