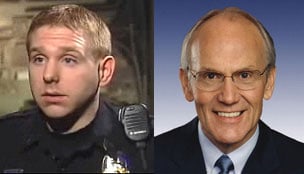 The Smoking Gun has posted a copy of Larry Craig’s arrest report, filed by Sgt. Dave Karsnia (above, left).

Craig claims his actions were “misconstrued.”

“In an interview on May 14, Craig told the Idaho Statesman he’d never engaged in sex with a man or solicited sex with a man. The Craig interview was the culmination of a Statesman investigation that began after a blogger accused Craig of homosexual sex in October. Over five months, the Statesman examined rumors about Craig dating to his college days and his 1982 pre-emptive denial that he had sex with underage congressional pages. The most serious finding by the Statesman was the report by a professional man with close ties to Republican officials. The 40-year-old man reported having oral sex with Craig at Washington’s Union Station, probably in 2004. The Statesman also spoke with a man who said Craig made a sexual advance toward him at the University of Idaho in 1967 and a man who said Craig “cruised” him for sex in 1994 at the REI store in Boise. The Statesman also explored dozens of allegations that proved untrue, unclear or unverifiable.”

The Idaho Statesman has also demanded Craig give his constituents an explanation.