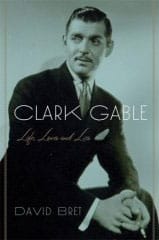 A new book on Clark Gable

details his extensive sexual romps rather than his film career, according to the Hollywood Reporter:

“Clark Gable’s father taunted his son, calling him a ‘sissy.’ The young Gable responded by fashioning a macho-stud demeanor and projecting dad’s disgust onto the many homosexuals he met and worked with. And author David Bret (‘Joan Crawford: Hollywood Martyr’) makes it clear that quite a few gays and lesbians populated Hollywood’s soundstages and swimming pools. The author tags virtually everyone who shows up here as straight, gay or bisexual, the majority falling into the latter two categories. Like previous accounts, this one alleges that early in his career Gable was ‘gay for pay’ and for career advancement. He squired older women, some of them perhaps closet lesbians, and had close personal, possibly sexual relationships with a number of openly gay men. He was, as well, a serial seducer of women. Bret’s sourcing is unclear throughout; he qualifies most assertions about Gable’s sexuality with phrases like ‘it could be’ and ‘it was alleged.’ As for insight into the star’s films and acting, look for it elsewhere.”