Friday’s rather stunning pronouncement by the Hollywood Reporter that “Merv Griffin was gay” sent enough shock waves through old Hollywood that Reuters, who syndicated the story internationally, was pressured to pull the story, which it did, in what Michelangelo Signorile calls “the most bizarre case of attempted censorship we’ve seen in years.” 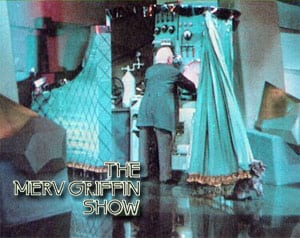 Here’s the timeline, via Editor & Publisher…

—Hollywood Reporter publishes story “Merv Griffin was Gay”
—Reporter pulls the story, republishes it titled “Griffin never revealed man behind the curtain.”
–Reuters picks up story in its news feed, syndicates it internationally.
–Reuters pulls story, with this explanation: “This was a story from The Hollywood Reporter that ran as part of a Reuters news feed. We have dropped the story from our entertainment news feed as it did not meet our standards for news. GBU Editor.”

Signorile reports that Elizabeth Guider, who has been editor of the Reporter for less than a month, pulled the story after pressure from “various Hollywood titans, advertisers and lawyers for one of Griffin’s companies.”

Writes Signorile: “Specifically, she’d received a legal threat from one of Griffin’s companies, but any editor worth his or her salt would know there was no case here: a dead man cannot be libeled, and there was no libel here anyway. Merv Griffin was gay, and many people could attest to that. Apparently some advertisers, specifically one with an ad buy that was a tribute to Griffin, were threatening ads would be pulled. Conceiveably, studios, production companies and others could bear pressure down, pressed by still others.” 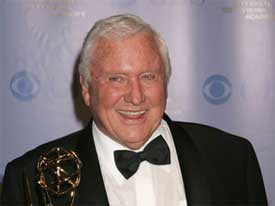 Ray Richmond, the article’s writer, said in an interview over the weekend: “Sure. I’m sure it was taken down because there was fear of litigation, and that the post was libelous and/or defamatory. And I certainly don’t believe that to be the case. I will have discussions with [my bosses at the Reporter, and I will hope at some point we can have it restored online. It seems that scotching the post gives the appearance of liability when there isn’t any. It was simply a factual, very informed discussion of the larger issue of the media’s difficulty in allowing someone to be labeled as gay in the mainstream, as if that is somehow a huge shame. My whole reason for doing the piece for the Reporter was to shine a light on that fact. Unfortunately that appears to be the case…even internally.”

The story, as of this morning, was live on the Hollywood Reporter website, with revisions. A detailed analysis of the revisions can be found over at Queer two Cents.

John Aravosis at AmericaBlog sums the situation up nicely: “You’d think the matter of an obit about or reminiscence of a public figure wouldn’t generate all this brouhaha, but that’s what happens when the world outside of the closet is so frightening to people in Hollywood that all sorts of insane measures are taken to reinforce the message is that there is something inherently wrong with being gay.”