Oxford Street, a hub of gay nightlife in Sydney with numerous hotels and 11 nightclubs, was the site of several anti-gay assaults recently, the Sydney Star Observer reports: 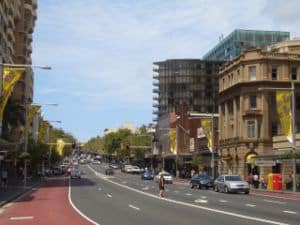 “At least three people were attacked near Oxford St last weekend, in a spate of homophobic violence that has rocked the community. One known incident occurred at Taylor Square on Sunday afternoon, in which one man was punched in the face and another was hit over the head with a bottle. The injured men were rushed to St Vincent’s Hospital and have since been released. One of the alleged offenders was arrested by police and charged with assault. ACON Anti-Violence Project (AVP) coordinator Carl Harris said the attack was one of a number of bashings in the Oxford St precinct at the weekend, but the victims were yet to come forward.”

“One of the biggest problems we face in terms of improving security around Oxford St is the fact that most victims of, witnesses to, homophobic violence don’t report it. As a result, the stats are a lot lower than they should be, which in turn diminishes the need for action to be taken by the relevant authorities. So we’re encouraging anyone who was a victim of or who witnessed any homophobic violence in the Oxford St area over the weekend to please report it to the police and the AVP.”