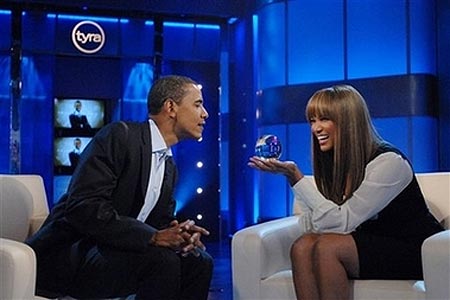 Tyra offered him a crystal ball, which she suggested he give to his wife Michelle for their 15th wedding anniversary.

When she asked him what she saw in it, Obama said, “I see the White House right there.”

Tyra has said she hasn’t thought about whom she might endorse: “If you look at a lot of people in the field we’re in, they’re constantly endorsing everything – from a new purse to a new hotel. This is just another thing [to endorse]. I love Oprah using her power, because she has the influence to change what she feels is necessary. [But] Oprah has been endorsing a lot of things. I can’t say I’ll publicly be endorsing a candidate, but it’s something I’m thinking about.”

Of course the endorsement announcement would go something like this:

“I see eight beautiful candidates standing before me…”