Bloc Party frontman Kele Okereke told the Chicago Tribune that the thing that surprised him most about playing the recent Live Earth 2007 was that “super-huge fan” Madonna came to see them in their dressing room. Unfortunately, the trip to meet the band didn’t turn out so well for Madge. 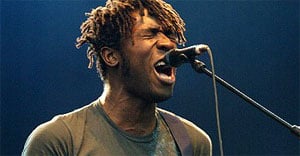 Said Okereke: “Our tour manager is this guy from Scotland that doesn’t know much about popular culture and popular music. So when she came in, he alerted security and security dragged her out. They had her head in a headlock, and they were putting her out of the dressing room. It was really surreal, and everyone stopped speaking. And the only thing we could hear is Madonna cursing and saying she’s gonna kill these guys. Yeah. She’s really tough because of all that pilates that she does. She [got out] of the headlock quite easily. And some of her people came along and told the security guards off, but she was so pissed off at that point that [when] I went to tell her that I was a huge fan of hers she completely freaked out and told me to get the hell away from her. And that was all in the space of like 10 minutes backstage at Live Earth.”